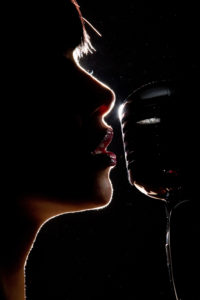 Steamy romance and erotica make up a very popular and lucrative genre in the literary world and I’m curious about how a narrator handles the subject matter, from a performance perspective. A narrator must verbally act out those intimate scenes, saying words that many people only ever utter in the safety of a darkened room with someone we love and know intimately.

A major comment I’ve seen in audiobook reviews is that male narrators should NEVER use a falsetto voice to portray a female character. There are other ways to get the listener to willingly suspend disbelief and buy into the performance. For instance a male narrator might add a touch more breath to his voice, or speak more hesitantly or softly, based on the persona of the female character he’s voicing. Women narrators who bottom-out their voice in a strained baritone delivery when narrating a male character, also risk ruining the listener’s buy-in, not to mention their narrating voice. Many female narrators have found that adding a touch of gravel (aka “vocal fry”) to their voice goes a long way in bringing a male character to life. These are just a couple of technical aspects of narrating dual point of view romances. Now let’s delve into what goes through some female narrators’ minds when voicing this very sensitive genre.

I am privileged to have been invited to join a secret group of females who narrate “spicier” books under a pseudonym. Despite the fact that my connection with these women is facilitated by social media, my imagination created a kind of film noir setting…

IT WAS A DARK AND RAINY NIGHT…

I walked quickly down the desolate narrow alley lined with trashcans and the occasional scrawny cat digging through the day’s discarded scraps. I pulled the collar of my trench coat higher up around my ears. I began trotting faster down the alley, and the staccato echoes of my own steps chased me to the end, where a chain-link fence rose high up into the night. Raindrops spattered my face as my eyes followed the fence to its full height, and squinted at the razor wire looped around the top. I shuddered and turned away, finding myself face to face with a heavy metal door recessed into the side of the old brick building. I knocked three times as instructed and waited for the small panel near the top to slide open. After a moment, it did, and a set of beautiful, mysterious eyes fringed with luscious, heavily mascaraed eyelashes appeared. Without saying a word, she opened the door and beckoned me to enter.

I hurried in and had to step quickly to catch up with the figure of my hostess in her flowing hooded cloak, disappearing down the hallway to my left. Another few turns in the labyrinthine hallways, and I found myself standing at the edge of a room. It was lit only by candles and there must have been two dozen similarly shrouded figures grouped in small clusters throughout the room, conversing in muted tones. The cloaks they wore ranged in color from deep burgundy to a rich forest green, black to royal purple. No face was visible, and as they noticed my presence, all conversation dwindled away. Suddenly, as if on cue, they soundlessly glided to sit in a circle in the center of the room. One of the women spoke in a low, mellifluous voice, asking “What do you seek to know?”

I stammered the words out in a rush: “I-I-I was wondering if you all narrated under a pseudonym, and if so, why?”

The murmuring among the group was brief and another answered: “Yes. We chose to remain anonymous out of consideration to our families, our clients, and our friends. While we believe in what we do, we do not wish to cause undue distress to those aforementioned, and feel that using a pseudonym is a fair way to continue without causing harm.”

I scribbled this response in the small damp notebook I kept in the pocket of my trench coat. “Do you like the content you’re narrating?” I squeaked out, slightly intimidated by the sonorous, articulate tones emanating from the dark hoods. No wonder they’re romance narrators… they sounded great.

Again there was a brief period of discussion, and then a different, more feminine and seductive voice issued forth: “We enjoy it. A well-written story is the key. Sexuality is a part of intimate relationships. So when an author, whether the book is fiction or non-fiction, writes in such a way to inspire someone, it makes it exciting and fun to narrate. Plus, who doesn’t enjoy a spicy fantasy now and again? If listening to a sexy story ignites someone’s passion and they can share it with their partner, then that can only be a good thing.”

The sultry, husky, five-star voice of my hostess chimed in: “Seriously, I love helping people embrace their sexuality. We’re inundated with so many images that imply only perfectly beautiful people are sexy and that is so not true. Everyone should feel sexy and desirable. Even though I don’t write the books I narrate, I look for things that reflect my own values and beliefs. If I can connect to it, then my performance will help the listener connect as well. I’m all about being positive and helping people have a positive sexual image and experience. Intimate moments can easily be undone by insecurities and self-doubt. Good sex is not contingent on being perfect, it’s about being free and relaxed and comfortable with someone who totally adores you for you.”

That was interesting. I pressed further: “Are there some books you won’t narrate?”
A gorgeous dark green velvet hood turned my way and a tough-girl tone resonated: “My line is very clear. I will only narrate romances that encourage sex-positive, pleasurable experiences. If the book contains non-consensual sex (rape or dubious consent) or anything illegal (like under-aged sex or violence), used as a way to derive sexual pleasure, I will decline the project. I have known too many people who have been victims of sexual assault/abuse, so I cannot, in good conscience, narrate books with that material used for that purpose. Also, there is often a fine line between this behavior and BDSM. An author who researches/is part of that lifestyle knows how to represent it in a way that is consensual and not abusive. I appreciate that.”

Nearby, a lovely warm voice weighed in: “It’s my voice going out into the world and it matters very much to me what I attach it to. It’s a piece of my soul. If I discovered a book I’d agreed to narrate contained episodes of non-consensual sex, I wouldn’t even think twice about pulling out of the project, giving my apologies. (We don’t always have time to pre-read a book before we accept the project.) It’s ok to have boundaries.”

A whispery voice piped up from across the room: “I bow out. I don’t want those stories out in the world, and I can’t give voice to them. What I love about erotica is it’s empowering to many women sexually and emotionally. I guess the only thing would be if there was rape that happened in a story and it’s part of the woman’s arc and she overcomes that, then maybe. But the scene couldn’t be written to titillate. It is a tough issue. I had this come up in the middle of a book series, and finally decided to go ahead because 1. it was unfair to drop out in middle of series and 2. it was an important event for the girl in forming her identity. And, it was ultimately a story of triumph over despair. It is very difficult to pull off an unbiased performance when it happens though.”

Noticing many hoods nodding in agreement, I understood that this was a group of secure, thoughtful women. I decided to change the subject and bring some levity to this somber gathering. I uttered one last question: “Have you had any bloopers or funny experiences while narrating this spicy stuff?”

A tall hooded figure leaned forward and said in a conspiratorial tone: “When I first started recording these I was working at a studio in Los Angeles with an engineer. At first it was a little uncomfortable due to the intimate and graphic scenes and then there were times when the scenes or script would push nerves to the edge and the engineer or I would lapse into a fit of laughter. One particular time I happened to glance out my little window and notice the engineer was no longer manning his equipment. I stopped reading, and opened the door and he was on the floor laughing hysterically. Sometimes you just can’t help but laugh.”

I closed my small notebook and slipped it back into my deep pocket. I gazed around the circle at these secretive, intelligent women, and in unison they rose and slowly filed out of the room in one straight line. Then my hostess turned to me and led me from the room, through the maze of hallways, and deposited me unceremoniously outside the heavy metallic door, which closed with a clang behind me. I shivered, alone in the wet alley, the steady drizzle plastering my hair to my head. Reflecting on the strange events of the evening, I mused that it was one of the weirdest interviews I’d ever conducted. And one of the most fun.