Pseudonyms…Why Would A Narrator Need One? 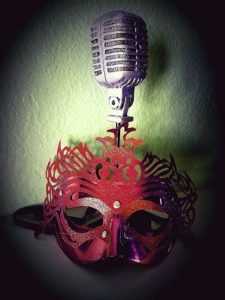 It has been a long-standing topic of discussion in narrators’ circles:  “Do I need a pseudonym?”  Usually it is the newer narrators who are unfamiliar with the reasons one would choose to record audiobooks under a different name, and are trying to decide if they need one.  However, I was reading some discussion threads on Goodreads recently, and it appears some audiobook fans and even authors are not sure of why a narrator would choose to record under a different name.

Authors have long written under pen names for a variety of reasons, and not surprisingly, narrators share many of the same reasons for maintaining a separate identity:

As I perused the Goodreads threads, I stumbled across a discussion from May of 2013, in which the participants were posting impressive lists of narrators and their pseudonyms.  I was taken aback at the casual treatment of narrators’ attempts to keep their identity hidden!  I read on, curious to see all of the comments, because I know of many narrators who are active members of Goodreads, and I wanted to learn of their reactions and input on this topic.

The overriding sentiment throughout the discussion was heart-warming for a narrator to read: the folks who were posting these exhaustive lists were enthusiastically “outing” their favorite narrators because they wanted to be sure to follow them, no matter what genre he/she narrated.  One message posted by “Diana”, stated,

“Today (May 1) Audible released 31 (!) new titles in the romance category. I’m a heavy duty buyer in romance and I was disconcerted to find that I recognized only 2 of 31 narrator names.  I left the site without buying anything because I was only interested in a couple of the books and I’m not inclined nor do I have time for sampling 31 (!) unknown-to-me narrators.”

Subsequent comments speculated on the reasons narrators use a pseudonym. One guess was that it was the publisher who requested a name change; another thought that it was the narrators’ concerns that they might be typecast, and mentioned that in utilizing a pseudonym, narrators were doing a disservice to the readers.  Then a member known as “Lea’s Audiobooks” contributed a very important component that should have both authors and narrators perking up their ears:

“Most of these unknown narrator names you are seeing though are first time narrators – more often than not with little to no training.  It’s the ‘anyone can read an audiobook in their closet at home without a director’ concept that’s sweeping the industry with lower priced books and often unknown authors. You have probably heard me rant on this but the main thing to remember is that if you buy one of these from Audible and don’t care for the narration, return it. It’s easy – you can return as many times as you want (although I’d be afraid to overuse it) and it sends a message that you don’t care for sub-standard performances all in the name of getting just any romance fix.”

The takeaway lesson in this exchange is (if you’re an author) take care in choosing your narrator, research them, their body and quality of work, and seriously consider the “pay per finished hour” rate structure over royalty share payments, as the better narrators refuse royalty share deals and often demand higher rates. If you are a narrator, do your very best on each production, which may include hiring a professional sound engineer to ensure the technical aspects of your recording are excellent, and also invest the time and money in professional coaching.

As I continued to read, a comment from a narrator popped up.  And what a narrator it was who posted!  Simon Vance, multi-Audie Award winner and house-hold name to audiobook aficionados, said:

“Let me jump in here and explain why I, and probably most of the long-term narrators in that initial list, might be found to have narrated under different names… When I came to the US it was standard policy for narrators to have different names for different publishers – apparently it was a hangover from when each publisher liked to have their own ‘team’ of voices… -and I’ve never done any erotica…honest!”

Simon’s explanation was a surprise to me, because I’d always thought that a narrator would choose to record under a different name primarily because of sexual or controversial content and the propensity for A) being discovered by your kid playing around on the school library computers, or B) the chance for creepy stalkers to find you and latch on.

So I decided to ask a well-respected fellow narrator why she chose to use a secret identity.

“I use a pseudonym to protect my clients that don’t write erotica and would prefer not to be associated with a narrator that does erotica – particularly those that write teen fantasy fiction or religious themed books.  I chose it after much deliberation and some trial and error – my one author disliked my first attempt, so I went back to the drawing board. I realized I would only be comfortable if it had something to do with me, like a long ago nickname (Pippi from Pippi Longstockings) and that’s how I came up with Pippa – and then Jayne just popped into my head.  It seemed right for Pippa.” – Pippa Jayne

Well, Pippa’s thought process certainly made sense to me. But how does a narrator decide when to give credit to their avatar, and when to record under their own name? I know that each narrator employs a set of criteria and values to help clarify which name to record under, and popular narrator Andi Arndt was gracious enough to share hers with me:

“When I’m offered a book, and it is already classified as erotica, it definitely goes into the pseudonym category. If there’s a judgment call to be made, some of the things I look at are:

Both Pippa’s and Andi’s diligence and thoughtful consideration of their projects and clients speaks well of their work ethic and the respect they exhibit for their craft. It got me thinking that maybe I could come up with a good, foxy moniker and start seeking out some spicy romantica to narrate!  Nothing wrong with trying new things, right? So I solicited suggestions from a few narrators on Facebook…. The most prevalent advice was “GOOGLE IT!” This would hopefully prevent me from choosing a name that is already in use by someone famous, nefarious, or notorious, or someone who is already a well-known author or narrator.

Other well-intentioned advice included choosing a combination of my initials, middle name, and maiden name.  Or how about combining the name of a textile with my favorite food? Or a beloved pet’s name plus a type of seasoning?  Hmmm. I think I need to mull over this a bit more before I settle on a suitable alias.

Then it occurred to me that if I chose to narrate material that would require me to hide my real identity, how would I audition, market myself, and interact with the authors and publishers for whom I wish to narrate?

If I want to create a presence on ACX where I can upload samples of my spicy narration, without having my name associated with it, I need to create an alternate profile using my new spicy narrating name.  (I’m leaning toward “Jacquard Ganache”.) Authors and rights holders can search for a producer using ACX’s customizable search feature.  Filters such as gender, accent, genre, language, payments, and many other categories can be selected to narrow the search.  If I were not concerned about having my sexy narration demo show up under my real name or have my real name show up when someone narrows their search to erotica producers, I could simply audition for and accept jobs using my original profile, and then just record my pseudonym in the opening and closing credits, and when I finish and submit my narration, specify to ACX which name I wish to show in the credits online.

Maybe I want to create a complete identity for my avatar, underscoring the separation between my real self and my bolder alter-ego, (I’m not sure about the “Jacquard” thing.  How about “Spunky Terragon”?  I was thinking about how we like to grill out on weekends, but “Spunky Buttrub” was just too much). I can build a website using my new name as the domain name, including an email address and social media accounts for Facebook, Twitter, Soundcloud and whatever platform I want to utilize.  Now I have to think about how much time and energy I want to put into having my alias post and participate on these social sites. My head is beginning to spin…  But if this sounds daunting, I’ve learned that it is not uncommon for narrators to adopt more than one pseudonym!

Then there’s business cards, letterhead, swag, podcasts, guest appearances (who to be? Myself? My avatar?) If I REALLY want to establish a secret identity, I can get a DBA (“Doing Business As”…research it; it can be different in your own state), open up bank accounts using the DBA, or even consult a lawyer if I want to find out how to be really super secret. But it’s probably overkill, unless you’re crazy successful, as well as very, very private.

Well, I hope I have helped enlighten you to the reasons behind preserving your real name, and how to go about creating a life for this new you. I think I’ve decided on a fierce, sultry, uninhibited new narrator-name. But I can’t tell you what it is or it wouldn’t be a secret.